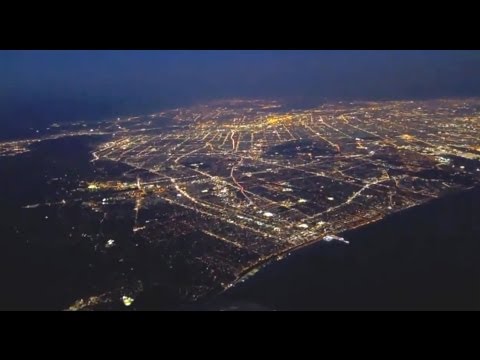 Who doesn’t know LAX?  You’ve probably seen it in movies hundreds of times.  What you may not know is that it has nine terminals.  Terminal 4 even has a satellite sub-terminal used exclusively by American Eagle and U.S. Airways Express.

You won’t find any French on the signs in LAX, but you will find English, Spanish and, occasionally, Chinese.  The touch screen terminals however provide at least 12 different languages including English, French, Chinese, Japanese, German, Spanish, Italian, Dutch, Russian, Portuguese, and something I think might be Persian.

It is amusing to note that the TBIT (Tom Bradley International Terminal) actually looks a bit like the Sydney opera house in Sydney, Australia.  Like so many of Los Angeles’ denizens, it, too, had a face lift in 2014-15.

Aside from the 10 meter tall Gateway Pylons which change colors at night with interior illumination, there is the iconic Theme Building which looks like a flying saucer had landed at LAX.  It used to have a rotating restaurant, which was eventually fixed in place.

Parts of the building started to deteriorate, and the restaurant was eventually permanently closed in 2013.  The observation deck is still available for the public on weekends as is a ground level cafeteria.

Lax, like most airports, began its life as a general aviation field.  In 1928 it bore the name Mines Field.  It played a role with military flights throughout the Second World War.  In 1946, commercial aviation began.  Four major airlines moved from Burbank to the new airport effectively making it the top air facility in the area.

In the 1950s it acquired official name Los Angeles International Airport, and acquired its designation LAX.  Jet service began in January 1959, and by 1961 LAX had logged more than one million jet flight passengers.  Roads and bi-level roads were built to accommodate the increasing volume of traffic at LAX.

Currently it is reported to generate 37.3 billion in labor income in 126.6 billion in business revenues.  The LAX Modernization Program continues to proceed with an expected completion year of 2023.

Of course it is always fun to look at the aircraft so this live feed will probably hold your attention as it automatically moves back and forth showing lots of assorted activity at several terminals, taxiways, and has a good view of runway 25 Right.

Ordinarily when experiencing a landing with a video, I recommend right-clicking on the screen and setting the Play Speed to “Ludicrous” so you can see what it looks like to an F-15 pilot coming in at just under ultrasonic speed.

In this case it is completely unnecessary.  What you will see is a wonderful polychromatic display of the lights of Los Angeles, blended with a brilliant sunset.  And just to make it particularly noteworthy, the soundtrack is Los Angeles, by Sugarcult.

To add that extra layer of reality, don’t forget to check out the Flight Radar.  There is a special feature that cannot be linked directly, but I’ll explain it thusly: Once you are in the feature at the link above, choose an interesting plane, and click on it.  On the left side of the screen you will see a box with details about the craft.  You’ll also see a cube shape with 3D in it…

Click 3D that and you will be taken to a graphic representation of that plane, flying over a Google Earth type map, showing you precisely where the plane is, and what it is flying over.  You can move the image around with your mouse and observe it from any angle.

If you’re a fan of Air Traffic Control you can watch the skies around LAX here.  Clicking on any plane will identify it for you, where green is outbound, blue is inbound, and gray is just passing through the airspace.  Finally, if you like to listen in on ATC air-to-ground communications, have a listen here.

With such a high-volume of air traffic, incidents are inevitable, dating all the way back to the 1940s.  There have been no fatalities associated with the airport since the 9/11 hijackings of the planes destined for LAX in 2001, so it has a very good safety record.  In fact, the last fatalities were in 1991, so they’ve been good for a quarter of a century.

LAX is a large airport, with dozens and dozens of restaurants, carpeted waiting areas, comfortable seating, and lots of artistic flair.  Yes, it’s busy, and sometimes crowded, but it’s clean and efficient, and certainly not the worst part of your journey!