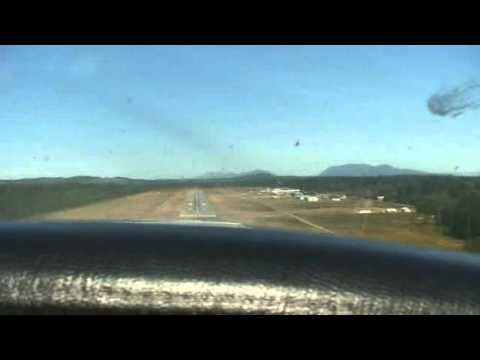 Vancouver Island is a beautiful place, located in the Canadian province of British Columbia.  Its airport, with airport code CYBL/YBL, is designated as a Port Of Entry for the country.  It is staffed by the Canadian Border Services Agency (CBSA).

Since the town of Campbell River will never be described as a burgeoning metropolis, it is something of a surprise to see over 30,000 aircraft movements per year, or more than 80 per day.  They have a single runway, 12/30, which is 1981 metres (6500 feet) long.  They also support two helipads, one concrete and the other asphalt.

If you want to have a look at the runway, they maintain a pair of live webcams.  One faces north and the other faces south.  Sadly, it is not streaming video; but you can manually refresh it every minute by reloading the page.

If you’re a fan of Air Traffic Control you can watch the skies around YBL here. Green is leaving the airport you selected; blue is inbound, and grey is passing by.

As always, Flight Radar is available so you can see how many airplanes there are in the sky around the Campbell River Airport.  Clicking on any plane will identify it and will reveal all sorts of data about it, often including a picture of the actual craft.  You can see its current altitude, ground speed, registration, its departure and arrival times, flight links and whether it is delayed.

You might think that’s quite enough, but there’s one special feature you might like to try out if your computer has decent graphical abilities.  See the little red outline?  Click that (on your computer) and the aircraft you’re following will appear over an accurate map in animated form with an inset Google Map so you can see where you are in the flight.

You can click and drag on the interface to position the camera wherever you would like, so you can sit high, and behind the ship, to see where it’s going while observing the terrain below, or an oblique side view so you can watch the coastline or the mountain’s going by.  If you don’t move the screen for a certain period of time it suspends itself to save them bandwidth.  Maximum session is 30 minutes, whereupon you have to reload the screen.

Just for a change of pace here are three YouTube videos, the first showing a Cessna 172 takeoff from Campbell River airport on a quick flight down the river to the city of Vancouver, with a nice little geography lesson incorporated along the way.  The second video is a Piper Cherokee with a new young pilot landing at CYBL/YBL.

The final video is a commercial flight in an older SAAB 340A coming in for a landing at Campbell River.  This craft was last manufactured in 1998 before the Swedish manufacturer went out of the civilian aviation business.  Even though this twin-engine turboprop craft is 20 years old, airframes are not treated like used cars and scrapped when the newest model comes out.

Aircraft, particularly commercial aircraft, are rigorously maintained, if they are still flying regularly.  Once an aircraft is completely paid for there is very little reason to replace it unless technology has advanced significantly to improve the safety, comfort, or convenience (for passengers) or if the fuel efficiency or maintenance costs have changed dramatically (for the airline or owner).

The other big consideration is simply the number of cycles (combined landings and takeoffs).  Each cycle results in a pressurization and depressurization of the aircraft—that’s part one.  Each cycle also involves a significant temperature change from ambient on the ground to -40 at flight level causing the metal to expand and contract—that’s part two.  Finally, each cycle also involves the significant stresses of taking off and landing again—that’s part three.

The development of the airport was actually the result of a group of locals getting together in 1954 to discuss the possibility.  There was plenty of economic potential to be developed in the Campbell River area and so they perceived a need for a well-thought-out transportation hub.

Five years later, utilizing a donated building that they had moved to the site, the airport opened in 1959 with a single gravel runway.  After they persuaded the bears and the deer that this wasn’t the ideal place for them this little aerodrome really began to take off.

Nowadays, as home to several aerospace and aviation companies, it’s a vital part of the growing community.  It’s unique on the island since it is the only air facility equipped with ILS, high visibility lights, and other essentials.

They have experienced four fatalities out of 15 passengers on a single flight in 1969.  Because visibility was in the 3 to 4 km range, with only a 400 foot ceiling, an ILS approach was called for, but the crew deviated from standard procedure and struck a 1,047 foot tall hill at the 932 foot level.

Filled with friendly people and a laid back lifestyle, Campbell River happily provides their services for aircraft from Cessna 150s all the way up to 737s.  Budget and National both provide Car Rental Services, and of course there’s long and short term parking for your own vehicles (including your aircraft!)

Come by and see what “friendly” is all about.