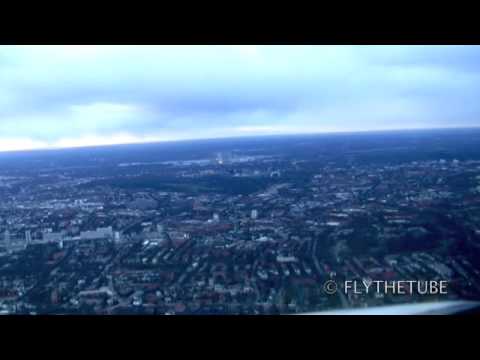 In 1910 Count Ferdinand von Zeppelin visited Hamburg to raise awareness and support for the amazing new form of travel and transport—the dirigible.

Enough enthusiasm was engendered to cause leading citizens and the people of Hamburg to donate the funds and efforts necessary to build their very own airship hanger, which they then turned over to the airship company upon completion in 1911.

By 1912 everything was ready to go, but before long, the new rivals to the airship, “areoplanes”, had joined them on the field.  During the First World War a lot of shortcomings for dirigibles became apparent.

And as a consequence of the outcome of WWI and the Treaty of Versailles, most of the German Air force was taken out of the country, planes were destroyed, and the hangars and workshops where damaged so as to make them useless.

Despite the outcome of the war, Fuhlsbüttel got back into the air transport business.  The electric utility AEG created a new company, Deutsche Luft-Reederei (DLR).  Shares in the company went to HAPAG, the Zeppelin Company, and Deutsche Bank.  DLR was the world’s first airline.  The Allies insisted that the hanger be razed, and in 1921 the DLR Company failed.

The airport suffered because of the restrictions as a result of the war, but made progress.  By 1929 it was a going concern and then the Depression’s effects were felt.  Growth stalled until 1934 when passenger traffic started to climb again.  By 1937 passenger traffic had risen to 57,194 and Hamburg was the fourth largest airport in Germany.

In 1939 a new terminal was opened, and just four days before the outbreak of the WWII the airport was seized by the Luftwaffe “for the national defense”.  Sometimes a town just “can’t get a break”…

The consequences of WWII were that the Allies said that no German was allowed to own an aircraft of any kind and Royal Air Force took over the administration of civil aviation.  Hamburg ended up playing a significant role in the Berlin Airlift.  It equipment was brought up to date for civil aviation standards.  In 1950 the Germans redeemed administrative control over Hamburg Airport, and worked alongside the English.

In 1953 Germany regained air traffic control.  On July 1st of that year, the Union Jack was not raised for the first time since the end of the Second World War.  Although they still weren’t permitted to run airlines of their own, they were back in charge of the administration.      In 1955 the Treaty of Paris returned full sovereignty to Germany, and now they could be “back in the airline business”.

In 1954 an engine separated from an aircraft during decent for undetermined reasons.  Control was lost and the plane crashed killing all three aboard.

The only other incident with fatalities occurred in 1971 when two of the five demineralised “water” canisters (loaded at Düsseldorf Airport), which are used to spray through and cool the engines during take-off turned out to be kerosene and cause the engines to overheat and fail, causing a crash on a roadway 4.5 km. past the end of the runway.  There were 99 survivors and 22 fatalities.

The Hamburg Airport offers four high quality live webcams (delayed 15 minutes).  There are cameras on the apron which face both north and south, as well as two internal cameras that let you see inside terminal one and terminal two.

Here is a landing video, using runway 33, which is generally reserved only for bad weather use, but because of ongoing construction on another runway, 33 had been opened, so you get a rare flight right over downtown Hamburg.  Enjoy the view!

To add that extra layer of reality, don’t forget to check out the Flight Radar.  There is a special feature that cannot be linked directly, but I’ll explain it thusly: Once you are in the feature at the link above, choose an interesting plane and click on it. On the left side of the screen you will see a box with details about the craft.  You’ll also see a cube shape with 3D in it…

Click that and you will be taken to a graphic representation of that plane, flying over a Google Earth type map, showing you precisely where the plane is, and what it is flying over.  You can move the image around with your mouse and observe it from any angle.

If you’re a fan of Air Traffic Control you can watch the skies around Hamburg Airport here.  Clicking on any plane will identify it for you, where green is outbound, blue is inbound, and gray is just passing through the airspace.

Having passed its 100th Anniversary in 2010, Hamburg is one of the oldest airports in the world.  There’s no telling where aviation would be if the Nazis hadn’t come along and messed things up.

Sure, Hitler was popular (inside his own country) and provided employment, and luxuries, and a sense of self-esteem which had been destroyed by the terms of the Treaty of Versailles.  The problem was it was all a smokescreen for re-arming the country and for ethnic cleansing.

O, what a tangled web we weave when first we practise to deceive!  —Walter Scott

The AVRO Arrow was lost to aviation in Canada, but we were somewhat luckier than Hamburg because the engineers and designers all moved on to modern plane manufacturers and NASA, where you can see evidence of the Arrow innovations in every flying craft in the air today.