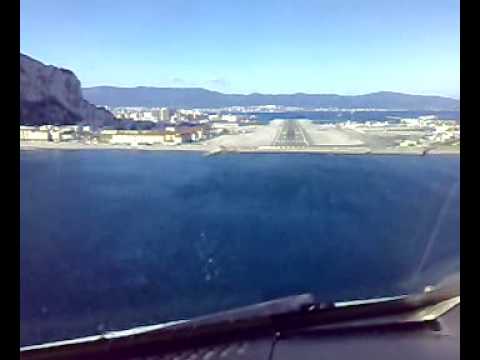 This airport, located on the southern end of the Iberian Peninsula, was originally made operational in 1939, but it didn’t look nearly as nice as this modern structure with the Rock of Gibraltar in the background.  It was actually constructed on the land used for the region’s race course, originally built by the Maltese residents.

When Britain took ownership in the early 1700s, “foreigners” were invited to leave.  They have slowly filtered back over the centuries and the broadly mixed culture of the Mediterranean flourishes once again.

The History Channel has named Gibraltar as the 5th Most Extreme Airport in the world.  The winds around Gibraltar (The Rock) can occasionally be surprisingly turbulent, requiring a plane to take a second, or even a third pass at the runway, in order to land.  It is not entirely uncommon for a pilot to say “Forget it!” and instead head to nearby Malaga Airport in Spain.  As you can see in the map image below, Gibraltar shares a land border with Spain directly on the north side of the Airport.

Spain actually makes a claim on Gibraltar as its own territory, despite the Treaty of Utrecht in 1713.  Twice in the last 20 years they have offered Spanish sovereignty to Gibraltar but have been turned down flatly both times.

Gibraltar is a British protectorate (or more correctly, a British Overseas Territory), and self-governing, with a unicameral parliament.  All political parties in Gibraltar support Gibraltar sovereignty.   Its 30,000 citizens are particularly proud of their history and the extremely important role the country played controlling access to the Mediterranean Sea during WWII, since the Strait of Gibraltar is only about 8 miles (13 kilometers) wide at that point.

The flights are not frequent but you can observe the comings and goings of airplanes here with their webcam which refreshes every second. Planes take off and land to the middle-right of the image.  By going to this link, you can see what is in the air surrounding the airport so you know when to tune to the webcam.

Of course the fun part is watching a landing from the cockpit and so we have a video showing the approach and landing from an A320 small passenger jet.

Unlike most major international airports where active roads are kept a discreet distance away from active runways, that is not the case in Gibraltar.  Five minutes before every landing, a major traffic artery named Winston Churchill Avenue, which crosses the main runway, is closed.  That unique feature about the airport can be seen in this video.

At the current time they are building a bypass road to reduce the (up to 2 hours per day) closures to accommodate air traffic.  Concurrently they are designing a 4-lane tunnel to completely remove the road from the landing area.  Apparently, though, they still think it will be a good idea to continue to let pedestrian traffic cross the runway…

Currently a street sweeper vehicle is released to clean the portion of the runway where pedestrians and vehicular traffic have been.  It makes sure there are no small objects that could be sucked up into a jet engine.  Littering is very seriously frowned upon.

Once everything is spic-and-span, the plane lands, turns around at the end of the runway and crosses the road again on its way back to the terminal since there are no taxiways parallel to the runway.  The entire process, from initial closure to reopening of the road takes about 10-15 minutes.

Despite the designation of international airport, Gibraltar only sees about 1,300 passengers per day, or not quite half a million people per year, so the road closure is not a frequent occurrence.  A typical A320 Airbus seats 150 in two different classes, or 180 for the all-bargain airlines with no first class.

Between passenger and cargo aircraft (all of the small variety) the Airport sees about 7-11 flights per day.  Bigger aircraft have no possibility of landing there since even the smaller craft that land there need every inch of the 5500 foot (1600 m) runway to come to a safe stop.

They demolished the old 1959 terminal in 2014 because it had reached its maximum capacity and was somewhat antiquated.  It was superseded by the new terminal in 2012, which has a capacity to handle 1½ million passengers per year.  Since the current flow is less than a third of that amount, if they expect to expand to the capacity of the terminal then these changes to the road & runway combination are essential.

More importantly, if they expect bigger jets, they should lengthen either or both ends of the runway further out into the water.  7,000 feet (2,150 m) is now considered a short runway for regular air traffic, and most new runways are 10,000+ feet (3000+ m) long to accommodate modern jets.

Despite the crosswinds and variable landing conditions, there have only been three incidents.  One occurred in 1943, which resulted in the death of the Prime Minister of Poland, who was then in exile.  Conspiracy theorists have some thoughts about that.

There was another occurrence in 2002 when a pilot brought the nose wheel down too roughly in the plane suffered a bit of structural damage.  There were no injuries.

The Saturday incident occurred in 2006 when a crew had to go around for another attempt at the runway, and turned in the wrong direction so the air traffic control and to guide them away from a high point of land that they were headed for.  No injuries.

This is probably one of the smallest International Airports in the world.  It takes an experienced pilot with a certain talent to land here and take-off again.  Presumably that’s the only kind they hire.  If seeing “The Rock” is on your bucket list and this is the very best airport for that.