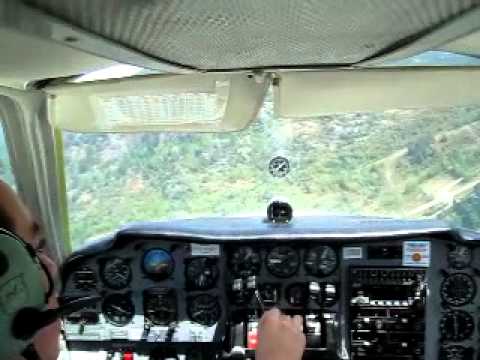 Renamed in 2009 as West Kootenay Regional Airport (YCG) it is still known locally as Castlegar Airport.  It sits amid 100,000 residents, and is surrounded by one of the best mountain biking spots in all of Canada.  If you like the rugged outdoors but still want to be able to retire to an urban centre at the end of the day this just might be the ideal spot for you.

Located almost exactly halfway in between, this airport services the West Kootenay community with daily flights from both Calgary, Alberta, and Vancouver, BC.  In a city of 100,000 it’s surprising to see 74,000 passengers annually, or about three quarters of the city’s population, but it does serve to emphasize that the airport has 12,500 annual aircraft operations, or about 34 per day.

The town is surprisingly popular, attracting people such as Christina Ricci & Anna Chlumsky while making Gold Diggers: The Secret of Bear Mountain; Steve Martin and Daryl Hannah to film Roxanne; Ethan Hawke (accompanied by Uma Thurman) to film Snow Falling on Cedars; Willie Nelson to appear in the movie Starlight; Lee Majors in the movie Out Cold; Kurt Russell filming Miracle; Jessica Biel in The Tall Man, along with her then-boyfriend, Justin Timberlake; and even Olivia Newton-John.  This region just appears to have that “special something”.

The airport was constructed in 1950, but it was as early as 1920 that the Nelson Board of Trade was scouting for locations.  It wasn’t until 18 years later that they finally cleared an area for an emergency field.  The Department of Transport (DOT) and Trans Canada Airlines (TCA) agreed that the location was unsuitable.

In 1945 the Land Settlement Board expropriated some Doukhobor lands and put them aside for the airport.  Volunteers cleared the land of various obstructions, providing a 1,200 x 300 m field that had an excellent potential for aircraft landings and passenger service.  The first plane landed in 1947 as Canadian Pacific Airlines began its service between Calgary and Vancouver.  In 1948, when the Columbia River flood took out most other forms of land transportation, the airport clearly demonstrated its value.

After more fighting with the Doukhobor squatters, enough land was obtained to extend the runway to 455 m (1,500 feet).  Finally they got a building in 1950.  In the centennial year Canadian Pacific Airlines began jet service to Castlegar.  In the early seventies the original 21 year old terminal was replaced with something a little more modern, and it, in turn, was refurbished in 1978.

In 1997 ownership of the terminal was transferred to Castlegar from Transport Canada in accordance with the terms of the National Airport Policy.  Selkirk College was already running its Aviation—Professional Pilot Program, and elected to construct an Aviation Training Centre in 2005 to support it.

In 2009 there was a sudden influx of money to the tune of one million dollars.  This was used to install night time visual beacons to permit night time flights and expand the capabilities of the airport.  At the same time it was officially renamed to the West Kootenay Regional Airport.

Forest fires are not an unknown threat in the region.  More money was spent in 2010 to expand the apron so it was possible to refill two air tankers simultaneously to make forest fire fighting more efficacious.

Here’s an unusual video, showing a cockpit view of a landing at YCG of a circa 1958 Beechcraft.  Certainly no glass-cockpit for this aviation professional—all analog gauges and controls except for what appears to be a Garmin radio stack in the middle right.  And you have to love the R2-D2 noises as the flaps are extended, and when the landing gear is lowered and locked into position.

There is something to keep in mind as you watch this video.  West Kootenay Regional Airport is said to have the second hardest approach in all of North America.  It’s not unsafe, and in point of fact, there’s not a single aviation incident recorded in the Aviation Safety Network Database.  However as you’re watching the inbound flight you may notice that the pilot is turning steeply left for about 100° and then has to turn almost 290° to line up with the runway, and straighten out in time to make the landing.

Not only is the landing complicated, but often the weather conspires to make life difficult.  Over the last several years they have experienced rare months where only 50-60% of the planes successfully landed, and then strings of months with nearly 100% success.  Aborting to the nearest airport elsewhere on Vancouver Island means that passengers face a long ride by bus to get back to Castlegar.

It’s not that pilots can’t land here, as much as they simply won’t.  Nav-Canada regulations state that you need a ceiling of 914 m (3000 feet) to land here, but also stipulate that you need a 975 m (3200 foot) ceiling in order to take off.  Pilots don’t like to land with a minimum ceiling because then they are forbidden from taking off again—they’re trapped in the airport until the weather clears.

To add that extra layer of reality, don’t forget to check out the Flight Radar.  If you’re a fan of Air Traffic Control you can watch the skies around YCG Airport here.  Clicking on any plane will identify it for you, with the usual notes that green is a departing flight from your selected airport; blue is an arriving flight; and grey is a craft that just happens to be passing by.

It’s not the biggest airport; it’s not the busiest airport.  The question arises: What differentiates it from 100 other airports?  Apparently the natural beauty makes an awful lot of people from Hollywood want to make movies here.  The incredible terrain draws mountain bikers from all over the world.  The skiing in the area is first class, as attested to by hundreds of fans of the ski resorts in the area.

Maybe you should drop by and see what aspect of the area speaks to you.  Then you’ll have your very own reason for calling it special.