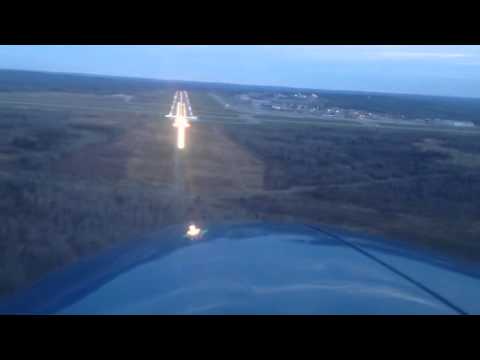 Away back in the summer of 1960, June, to be more precise, Halifax finally got its airport back.  It opened under a temporary license, and a few days later, on July 1st, it was issued an official licence permitting IFR (Instrument Flight Rules) operations.  Two months after that the air terminal building was officially opened on September 10th.

Almost 45 years later to the day (September 9, 2005), a ceremony was held at Halifax International Airport to rename the Air Terminal Building after the Right Honourable Robert L. Stanfield, often referred to as “the best Prime Minister Canada never had.”

Robert Loren Stanfield brought success to the provincial Progressive Conservative party in Nova Scotia by bringing them to power in 1956 and then holding the political reins for three straight terms.  He left provincial politics in 1967 to lead the Federal Progressive Conservative party, and led Her Majesty’s Loyal Opposition against the incumbent, Pierre Elliott Trudeau, until 1976 when Stanfield retired.  He passed away in 2003 from complications arising from pneumonia.

On February 9, 2007, then Prime Minister Stephen Harper renamed the airport after the man who changed the way healthcare and education were delivered to the whole country.  It is now known as the Robert L. Stanfield International Airport.

If you want to watch activities on the apron you can do that through their live webcam at any time.  It refreshes automatically about every 6 seconds, but responds instantly if you refresh the page.

Of course, you’re interested in flight operations so have a look at a dusk landing with full runway lighting.  This is on one of their two (four) runways 05/23).  Notice how the high-intensity lighting illuminates at ~0:30 seconds and immediately dims (~2:16) as soon as all three sets of wheels are on the ground.  This is a great way to reduce the frequency of replacing hundreds of expensive lamps.

The area got its first airbase at Baker’s Point in 1918 so that the RCNAS (Royal Canadian Naval Air Service) could operate their Curtis HS-2L flying boats to patrol for submarine activity.  World War One didn’t finish until the end of that year, so this was still considered essential.  The unit, however, wasn’t fully implemented before the war ended, and by 1920 the unit had been disbanded.

The base continued to be used by the Air Operations Branch of the Air Board since it was licenced for Customs.  It served seaplanes and flying boats, as well as acting as a repair and maintenance depot.

In the late-1920s the government asked the city of Halifax to provide an airport in the area to be part of the plan to implement coast-to-coast air mail service for Canada.  Construction began in the summer of 1930 on two landing strips 550 and 610 metres (1,800 and 2,000 feet) long.  The city received an airport license in January of 1931.  The airport was closed in 1941 after only a decade of operations.

In 1931 the Superintendent of Airways of the Civil Aviation Branch had remarked that improvements over the previous two years had been “miraculous” and that it was now “a really good Airport” which provided “confidence in the future of the Airport on the part of citizens.”

1938–1939 studies of expansion to examine suitability for commercial airliners concluded that the airport could not be properly developed.  The airfield at Dartmouth, however, was being used by the RCAF (Royal Canadian Air Force) and could be expanded, so operations move there.  Halifax Airport (with modest improvements) was made suitable for light aircraft.

Check out the Flight Radar to see what’s happening in the area.  There is a special feature that cannot be linked directly, but I’ll explain it thusly: Once you are in the feature at the link above, choose an interesting plane, and click on it.  On the left side of the screen you will see a box with details about the craft.  You’ll also see a cube shape with 3D in it…

Click that and you will be taken to a graphic representation of that plane, flying over a Google Earth type map, showing you precisely where the plane is, and what it is flying over.  You can move the image around with your mouse and observe it from any angle.

If you’re a fan of Air Traffic Control you can watch the skies around Nova Scotia.  Clicking on any plane will identify it for you, where green is outbound, blue is inbound, and gray is just passing through the airspace.

There have been three incidents with fatalities in 1965, 1969 and in 2004.  1965 was a small craft with three passengers that failed due to corrosion and poor maintenance.  1969 mysteriously vanished with three people over the middle of the Atlantic Ocean on a flight to Portugal, and 2004 was a cargo craft with 7 crew lost when they failed to calculate their takeoff weight correctly.

Passenger service has been unremarkable except for a touchdown slightly short of the runway that ended on the runway with 23 injuries (no fatalities) of the 138 aboard.  The plane was written off due to damage.

The airport has produced a self-promotional video that aggrandizes the airport a little bit and gives an idea of their business impact on the region.  It generates more than $1.25 billion in terms of economic impact.  If you have any business interests in the area, it is quite informative.