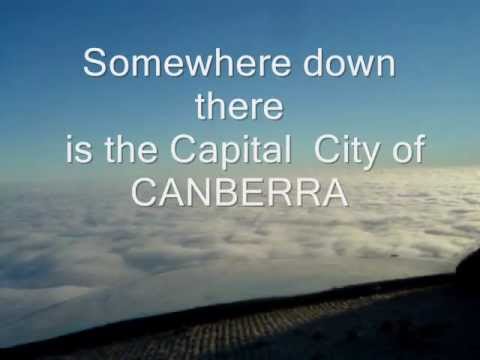 In the early 1920s air flight was still an exciting novelty.  Nowadays when most towns with more than 5,000 people have some form of airport facilities, it’s hard to imagine a time when airports were thought of as large grassy fields that were flat enough for airplanes to land on.

In the picture above (circa 1925) you can see such a field (or as they say Down Under, a paddock) which was used as the Official Airport for Australia’s capital city of Canberra.  Look!  Shell Oil was already providing fuel for aircraft by then.

There was very little air traffic to Canberra in those days, not being a scheduled destination for any air service, so the field largely served as an emergency landing spot for troubled flights traveling from Adelaide to Sydney, or other major destinations.

Around 1913 when Canberra was selected as the capital city they needed Parliament buildings, and by 1926 the “temporary” structure was complete (it stayed in use for 61 years until the New Parliament House opened in 1978).

But the planned a celebration called for an aerial display from the Royal Australian Air Force (RAAF), and many other planes as well, and the field in Dickson called the Northbourne Aviation Ground was deemed unsuitable for the size and type of aircraft that would be present.

A new location was chosen (another paddock) in the Majura Valley by Airforce Captain Henri Petre because it possessed 1000 metres of clearance in all directions.  It became the Duntroon Aerodrome (named after a local feature).  The first official structure on the site was a hangar in 1936.  The site became the Canberra Aerodrome, and three years later the RAAF built a military base on the opposite side of the aerodrome, away from the civilian hanger.

The needs of both were met during this time of concurrent operation between civilian aviation and the military.  In 2003 the military base essentially closed but they did leave a presence in the form of a small force which operates the Prime Minister’s VIP Fleet of aircraft.

Between 1960 and 1970 air traffic more than doubled from 200,000 to over half a million.  A new terminal was built to handle the additional traffic.

The 1970s terminal wasn’t ugly by any stretch of the imagination, but it was a patchwork of minor upgrades.  Good looking on the outside, this two level building had 42 different elevations internally.  That means in 42 different locations you had to take one or more steps upwards or downwards to continue walking.

Consistency became impossible to achieve because the two major tenants (Qantas Airlines & Ansett) held control over all capital expenditures.  Businessmen Terry Snow purchased the airport from the Federal government in 1998, in its rather run down state, because he saw the financial potential which a high quality airport in the country’s capital could bring.

He had difficulty making improvements until he managed to purchase one end of the terminal building itself so finally proper upgrades could begin for portions of the site.  He organized improved car parking, major renovations to the runway and apron area, built a new hangar, a new entrance, and numerous internal components for the terminal such as passenger waiting areas.
It took another half decade, but he eventually came to terms with Qantas (c. 2003) and by 2009 Canberra’s “AirVolution” was underway.  Their new terminal (largely complete by 2013) is completely up to date with contemporary standards.  And very glassy…uh…I mean Classy!

If you want to watch the goings-on at Canberra, you can visit their live webcam any time the Airport is conducting air flight operations.

As always, here is a video, but this time I want you to think about what it is like to put your life entirely in the hands of your instrumentation.  This landing is accomplished in heavy fog by ILS (Instrument Landing System), a system of radio navigation which tells the pilot where they need to turn, and how high they need to be, in order to meet up with the runway at exactly the right point.  Do you think you could be a pilot and have complete faith in your instruments?

To add that extra layer of reality, don’t forget to check out the Flight Radar.  If you’re a fan of Air Traffic Control you can watch the skies around Canberra Airport here.  Clicking on any plane will identify it for you, showing you its planned route and other interesting facts, often including an       actual photo of the craft you’re looking at.  Green is departing flights; blue is arriving flights; and grey are craft that are passing through the airspace but not interacting with the airport.

There have been surprisingly few incidents at this airport.  One craft experienced a particularly hard landing (pilot flared too soon and too high) in 2006, damaging the airframe beyond repair but there were no fatalities.  Another on a flight to Sydney experienced a pitch-disconnect, meaning that the left and right elevators were capable of moving independently and not synchronized.  They landed safely in Sydney.

The RAAF lost two aircraft in the 1950s with a total of five fatalities and three survivors.

Donald Horne wrote a book called The Lucky Country in 1964, which was a scathing indictment of Australia’s 1960 politics and economics.  He said that Australia’s growth in power and prestige was attributable entirely to luck rather than any sort of foresight or planning.

As if to deliberately spite him, the title of his book was adopted as an affectionate nickname for the country.  So call it what you will, Down Under, or The Lucky Country, when you arrive in Canberra, at least you know you’re going to find a fine Airport!