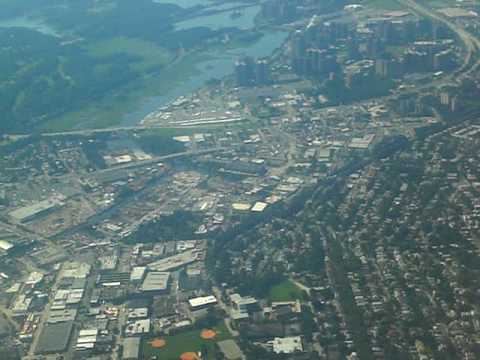 Opened on December 2, 1939 to commercial traffic, the New York municipal airport, then known as LaGuardia Field, obtained its official name in 1953 to honour the former mayor (1934-45) Fiorello La Guardia.

Prior to its commercialization it was originally a private airfield named Glenn H. Curtis Airport, which was later renamed to the North Beach Airport.

It was renamed for the mayor La Guardia because of the fuss he raised when he took a commercial flight to New York City, but was obliged to land at the Newark Airport in New Jersey since it was the only commercial Airport in the area at that time.

He ordered the plane to be flown to Floyd Bennett Field, a non-commercial airport, in Brooklyn, so that he could actually land in New York City, as his ticket had stated back.

This started his campaign to persuade New Yorkers to build their own commercial airport.  The Brooklyn field was too far away from Manhattan to be practical.  The next best choice was the North Beach Airport in Queens, which required extending its runways well out into the water so that larger planes could land.

Planes using magnetic compasses have to be wary of the deviations caused by the steel superstructure beneath the runway where it extends off into the water.  The extension was made with landfill brought over from Riker’s Island.  Many aircraft nowadays use gyrocompasses which are unaffected.

Having personally landed and taken off from LaGuardia Airport it’s easy to understand why commercial pilots call it USS LaGuardia.  The short runways, which extend out into the water, make it look very much like trying to land the plane on an aircraft carrier as you make the approach.

If you’re curious about the number system, runways are named for the magnetic compass direction they face (to the nearest 10 degrees) and by dropping the last digit.  So 9/27 means a runway which runs east-to-west at 90º-270º…

If you’re taking off from runway 9, you’re facing east, and from runway 27, you’re facing west, even though it’s the same strip of asphalt.  If there are two parallel runways they are designated 9L (left) or 27R (right) and 9R or 27L.  Where occasionally there are three runways, the middle runway is designated with the letter C added to its direction.

In this video, you get a nice tour of New York City and its surrounds as the aircraft finishes a circuit and lines up for its landing.  Here’s a fun trick as you watch the video on YouTube… right click the image and adjust the speed to the setting “ludicrously fast” and you’ll see what it would look like in an F-15 at subsonic speed rather than 180 knots or so that the pilot is actually flying.

If you want a continuous shot of the airport control tower, there is the Woodside webcam Which has been operating since 1999.  For more fun, see what’s in the air with the Air Traffic Control (ATC) flight monitoring.

To add a little more reality to the whole situation listen to ATC Live.  There you will hear automated approach/departure information such a cloud levels, visibility, wind gust speed, shear information, altimeter settings for the airport, and so on.

Of course the real reason everybody knows about LaGuardia Airport is that hero pilot Captain Sully (Chesley Sullenberger), the U.S. Airways pilot, safely landed US Flight AWE1549 in the Hudson River after a massive bird strike took out both of his engines at only 3,000 feet altitude.