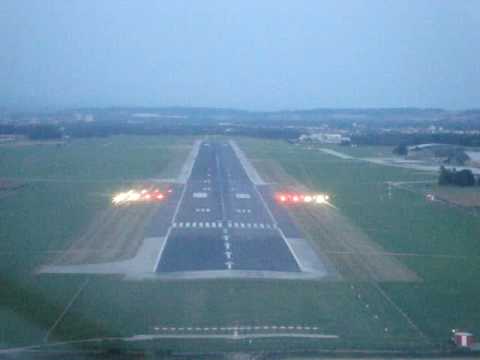 The Blue Danube Airport or Linz Airport (formerly known as Hörsching Airport), is located in Linz, Austria.  They currently manage a little over half a million passengers per year, decreasing steadily since 2005, but air cargo of about 46,000 tonnes currently, has been rising inversely to the drop-off in passengers.

They have one paved runway which is 3,000 metres (9,842 feet) long so it is suitable for most of the large jets, but not the giant class.

Its air history began in October of 1909 with the launch of the zeppelin named Estaric I.  The aerodrome was located midtown in Linz, but the NSDAP (the NAZI party) put an end to that in 1938.  It moved to nearby Hörsching instead.

From 1943 in 1945 the Luftwaffe installed several of its air units, rotating through various bomber wings and fighter wings there.

None at this location—this is a nice safe airport.

Be sure to check out the live webcam at Linz.  It offers views of the Airport’s apron and its taxiway.  Beneath the apron webcam is a clickable link which will perform a time lapse review the previous 24 hours in 10 minute increments.

How does this mysterious system work?  The great thing about it is that it requires no instrumentation on the plane.  Any plane can use this system although it’s ideally suited to planes where there is a distance of less than 10 feet between the height of the pilot’s eyes and a bottom of the undercarriage.

Divided into four slightly different angles, anything observing from a height greater than X degrees will see all white, but as the angle of sight decreases the first light can start to show its red aspect.  Go lower and the next one shows red; carry on and the next, and then the last will show red.

If you’re in the right spot, you see two reds and two whites.  If you don’t see them the way they should be, adjust your altitude until it is correct.

To add that extra layer of reality, don’t forget to check out the Flight Radar.  There is a special feature that cannot be linked directly, but I’ll explain it thusly: Once you are in the feature at the link above, choose an interesting plane, and click on it.  On the left side of the screen you’ll see a box with details about the craft.  You’ll also see a cube shape with 3D in it…

Click 3D that and you will be taken to a graphic representation of that plane, flying over a Google Earth type map, showing you precisely where the plane is, and what it is flying over.  You can move the image around with your mouse and observe it from any angle.

If you’re a fan of Air Traffic Control you can watch the skies around the Blue Danube Airport here.  Clicking on any plane will identify it for you, where green is outbound, blue is inbound, and gray is just passing through the airspace.

Have you ever seen the animated Disney classic called “Fantasia”?  This is one of many places where the river called the Blue Danube touches.  For a slightly wackier version, here’s Daffy Duck’s interpretation to compare to the original 1940 version.