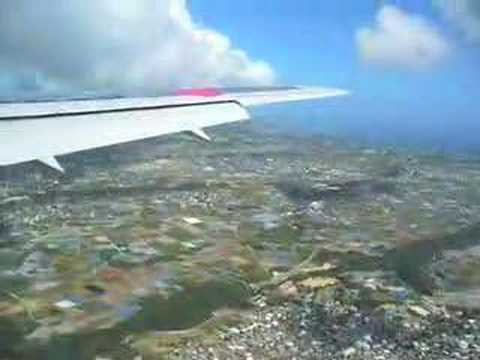 Although classified as second class Airport, Naha handles international traffic between the Japanese island of Okinawa and such destinations as Taiwan, Hong Kong, Korea, and China.  In truth it is actually the seventh busiest airport in all of Japan.

Even though the new International Terminal opened in 2014, the Japanese air authority still seems to be withholding the official designation for some strange reason.  Perhaps the new runway, set to be almost 9,000 feet long (which began construction in 2015 and will be ready for use by 2020) will make them change their minds.

To make that abundantly clear, Naha Airport typically ends up serving more than 15,000,000 passengers a year.  And if the very crowded airport wasn’t busy enough already, it also serves as home to Naha Airbase of the Japan Air Self-Defense Force.  This so-called second class airport has runway 18/36, which is nearly 10,000 feet long—30% longer than those found at LaGuardia Airport, in New York City.

In case you don’t want to do the math, they handle more than 42,000 passengers per day, of 150+ flights, averaging 300 passengers.  Bear in mind that some of our so-called international airports in North America would not find it unusual to experience less than 5,000 passengers for the entire day.  To put that in perspective, planes are landing and taking off 24 hours a day, less than 10 minutes apart.  If you want to watch that happen you can watch their live webcam at any time.

As always, when experiencing a landing, I recommend right-clicking on the screen and setting the Play Speed to “Ludicrous” so you can see what it looks like to an F-15 pilot coming in at just under ultrasonic speed.  Give it a try.  It’ll be fun.  Just remember to reset your speed when you’re done or your next video will look silly!

To add that extra layer of reality, don’t forget to check out the Flight Radar.  You can watch the movement of aircraft in the vicinity.

Once you’re in the airport the modern design is attractive and possesses the usual Japanese efficiency.  You move from the gate to the baggage claim area, or go up to the restaurants on the fourth floor, for a quick snack before you head to the departure lobby.  There you can hop aboard the monorail, with 14 additional stops, which will take you as far Shuri for between $2 and $3.

The Airport originally started out as Oroku Aerodrome, operated by the Imperial Japanese Navy in 1933, and became Naha Airport when the United States took it over in 1945.  It became a regular stop for Pan Am and Northwest Orient as of 1947.  They closed for two years in 1952 so it could be refurbished.  In the meantime traffic was redirected to Kadena Airbase.

As you know, Okinawa was returned to Japan in 1972.  It took another decade before Naha Airport was relinquished from U.S. military control and transferred to the Japan Air Self-Defense Force in 1982.

To make it more useful, there are under-bay traffic tunnels (6-lanes) which are connected to two different free trade zones (FTZ), one of which is about 6.5 acres (2.6 hectares), and another of 300 acres (122 hectares).   If you’re not familiar with them, these are areas where you can bring cargo in, exchange it with others, and have it leave the country without facing any customs or excise taxes.  It only becomes taxable when it leaves the FTZ.

In August 2007 China Airlines flight 120 experienced a sudden fire in the right wing as it was preparing to take off.  The whole thing was quickly ablaze, but all passengers and crew were evacuated safely.

In June of 2015, an All Nippon Airways (ANA) flight had to abort its takeoff when a Chinook helicopter flew across its departure path without clearance.  A Japan Transocean Air (JTA) flight landed on the runway and stopped only 400 m short of the other aircraft.  The 2nd pilot claimed he had not received the order to go around until after he had landed.

Away back in 1994, a flight from Cebu, in the Philippines had a bomb aboard which exploded while the aircraft was in flight.  One passenger was killed, ten others were injured, but the plane diverted to Naha Airport and landed safely.

In 2001 a pair of Japan Airlines flights got a little too close together, requiring the Naha Airport inbound pilot of a 747 to dive underneath the oncoming DC-10.  On average, they have one significant incident every seven years.  Your plane has a 1:400,000 chance of having some difficulty.

So this is a great looking airport, with modern amenities and conveniences.  It has a good safety record, and if you’re not afraid of crowds, then it ought to suit you just fine.  Who knows—maybe you’ll meet Ralph Macchio and a relative of Mr. Miyagi…