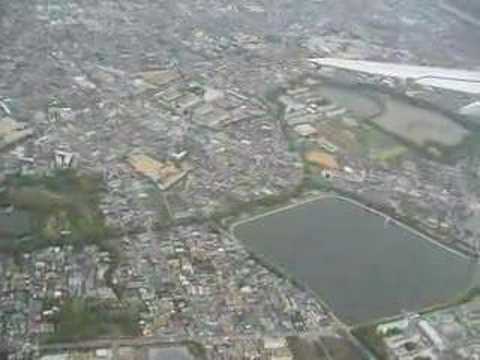 First built in 1936, the airport was primarily for the Imperial Japanese Army.  In 1945, after the end of WWII, U.S. occupation forces took over operations and expanded it by more than 300%.  Naturally they renamed it to Itami “Airbase”.  It was used quite heavily by the allies during the Korean War.

A 1959 it was returned to the control of Japan and they immediately expanded the airport to more than 300 hectares while renaming it Osaka Airport.  It accommodated air traffic from most major airlines and by 1992 they offered nonstop flights to New York City, Los Angeles, Sydney (Australia), and Honolulu.

Through the 1970s it was a political football, with lawsuits from local residents citing noise and air pollution, and about cases of eminent domain, where the national government took control of private property in order to expand the airport.  Through several levels of judicial appeal, the local citizens were finally awarded damages and extensive slot restrictions on landings, takeoffs, and hours of operation.

Limited to 370 flights per day (in or out) many of the airlines introduced wide-body aircraft with people packed in like sardines in a can.  Locals protested the increased pollution levels from these very large jets and cited the danger of many more injuries in the event of a crash.

It once served as the primary international airport for the region, but the dawning of the jet age ended its career in that area.  Propeller driven planes were quite noisy, but the early jets were even louder.  International traffic moved to Kansai International Airport (KIX) in 1994.

Contemporary jets are almost silent in comparison to the early models, and there’s a movement afoot in Osaka to bring back international flights with the modern quiet jets.  It might not include regularly scheduled flights right away, but the idea of having international charter flights has been gaining some traction.

Despite its international designation, Osaka Airport is almost exclusively a national or regional airport.  Some special international flights land there, such as the Chinese premier Wen Jiabao in 2007 and George W Bush in 2005, to visit with Prime Minister Junichiro Koizumi of Japan.

Most of the international traffic is handled by the “floating” Kansai International Airport about 40 kilometres further along the coast.

It is truly a beautiful airport at night.  The two parallel runways allow you to watch simultaneous landings and takeoffs with the millions of twinkling lights of Osaka as the backdrop.  Be warned, however, that if you want a catch a glimpse of this late night beauty you’ll have to do that before 8:00 AM EST because Osaka Airport suspends operations at 9:00 PM JST.  If you want to watch this is the place to go to monitor their live webcam at any time (even when they’re not operating).

As always, here is an interesting video, but instead of our usual offering of a typical landing, this one is the takeoff, followed by a long counterclockwise circle until the craft is headed east.  It provides a nice overview of the city, and for the last 20 seconds you can see the airport below, until the last moment when the plane enters the clouds.

To add that extra layer of reality, don’t forget to check out the Flight Radar.  If you’re a fan of Air Traffic Control (ATC) you can watch the skies around Osaka Airport here.  Clicking on any plane will identify it for you, including airline, flight number, departure and arrival locations, flight plan route filed, and call sign.   Green is departing, blue is arriving, and grey is just passing through the airspace.

While operating the Itami Airbase, U.S. forces lost two craft in 1946 and 1950 one with a total of 33 personnel.  In 1964 an aircraft experienced engine trouble during its initial climb.  Eight of the 10 occupants survived when it crashed in a rice paddy.

Two other incidents with no injuries were due to misjudged landings or equipment failure.  In 1986 a flight from Bangkok, via Manila, headed for Osaka, was subject to a bombing attempt, causing an uncontrolled decompression of the passenger cabin.  The crew made an emergency descent to get breathable air pressure back, and then struggled with the damaged aircraft for another 40 minutes until they landed safely at Osaka Airport with no fatalities.

There was one further incident, back in 1979, and it was a hijacker armed with a plastic knife and a bottle opener that demanded to be taken to the Soviet Union.  He was overpowered by the passengers.

It takes all kinds I guess…